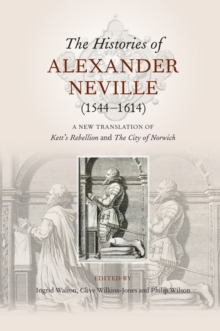 Alexander Neville (1544-1614) was an English humanist, author, poet and translator.

His skill as a Latinist brought him to the attention of Matthew Parker, Elizabeth I's first Archbishop of Canterbury, who appointed him one of his secretaries.

Neville's account of Kett's Rebellion is one of the earliest and most important sources on the 'Commotion Tyme' of 1549, when England was rocked by a series of uprisings triggered by socio-economic conditions and the impacts of religious change.

One of the first published urban histories, The City of Norwich offers a unique perspective on the development of Tudor historiography and demonstrates Neville's skill in weaving his source materials into a polished expression of national and civic pride.

At the same time, its account of the city's bishops honours the life and work of Neville's patron, Archbishop Parker, who was himself a Norwich man.

The Reply to the Welsh Nobility challenges the accusations of libel that followed the publication of De furoribus and is a small masterpiece of Ciceronian forensic oratory. Drawing on the editors' combined expertise in Renaissance Latin, early modern history and translation studies, these texts and translations are prefaced by a wide-ranging introductory section that examines what is known of Neville's life, his texts' origins and literary contexts, their significance in the development of Tudor historiography and the ways in which they reflect contemporary politico-religious concerns.

The translators' preface discusses the role of translations in the appreciation of historical sources, using recent developments in translation theory.

Together, these three texts reveal much about the uses of rhetoric and historiography in legitimating the actions of Tudor governing elites, affirming national identity and promoting the Elizabethan Religious Settlement. INGRID WALTON was formerly Head of Library and Information Services at the John Innes Centre, Norwich. CLIVE WILKINS-JONES is a Fellow of the Royal Historical Socety and a Research Fellow in the School of History at the University of East Anglia. PHILIP WILSON is an Honorary Research Fellow in the School of Politics, Philosophy, Language and Communication Studies at the University of East Anglia.