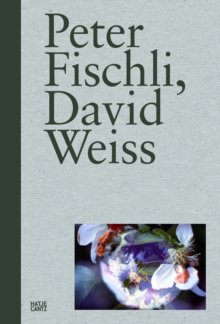 Swiss artists Peter Fischli (*1952 in Zurich) and David Weiss (*1946 in Zurich) have been working as a duo since 1979, availing themselves of a wide range of artistic forms of expression.

This publication features the artists' sculptures, installations, photographs, and films from the past twenty-five years.

Along with the seemingly trivial, fundamental questions about human existence inspire their ironic, clever works.

Their path seemed to be laid out for them as early as 1980, when they produced their first collaborative piece, the photo cycle Wurstserie (Sausage Series).

Whole and sliced sausages became protagonists in adventurous settings that would make great material for a film.

In their installation Fragenprojektion (Question Projection) (1981-2002), they confront the viewer with poetic everyday questions, such as "Will happiness find me?" Exhibition schedule: Sammlung Goetz, Munich, November 8, 2010-February 26, 2011