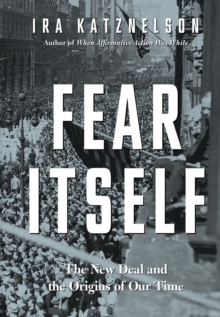 Fear Itself : The New Deal and the Origins of Our Time Hardback

Redefining our traditional understanding of the New Deal, Fear Itself finally examines this pivotal American era through a sweeping international lens that juxtaposes a struggling democracy with enticing ideologies like Fascism and Communism.

Ira Katznelson, "a towering figure in the study of American and European history" (Cornel West), boldly asserts that, during the 1930s and 1940s, American democracy was rescued yet distorted by a unified band of southern lawmakers who safeguarded racial segregation as they built a new national state to manage capitalism and assert global power.

This original study brings to vivid life the politicians and pundits of the time, including Walter Lippmann, who argued that America needed a dose of dictatorship; Mississippi's five-foot-two Senator Theodore Bilbo, who advocated the legal separation of races; and Robert Oppenheimer, who built the atomic bomb yet was tragically undone by the nation's hysteria.

Fear Itself is a necessary work, vital to understanding our world-a world the New Deal first made.