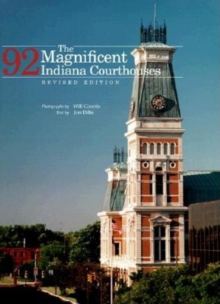 During the last quarter of the 19th century, architects designed new courthouses all over Indiana and a flurry of construction began.

About 60 of Indiana's 92 courthouses were built during this time.

The years between 1900 and 1930 produced 23 more. By the 1970s, most of the county governments in Indiana were operating out of antiquated, crowded buildings, with a handful choosing to tear down their old structures and rebuild with new materials of glass and steel.

While some counties were intent on building larger facilities, most counties were determined to maintain and restore the magnificence of the courthouses of old. This beautiful book presents Indiana's magnificent collection of 19th century and early 20th century courthouses, their architects, and their history.

It is a story in words and photographs of Indiana's 92 county "seats."