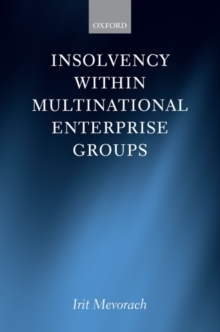 by Irit (Lecturer at the University of Nottingham) Mevorach

Insolvency within multinational enterprise groups (MEGs) raises complex issues due to the foreign elements of the case and the multiplicity of debtors.

The key problem is deciding to what extent and in which ways should there be 'linkage' between the entities in the course of their insolvency in order to promote insolvency goals.

Historically the issue has been neglected both in national and international regimes.

However, new initiatives are currently developing. In order to deal with this issue the work provides a theoretical framework, suggesting a balance between Entity-Enterprise issues (drawn from company law theory and the problem of enterprise groups) and Universality-Territoriality issues (drawn from cross-border insolvency and conflict of laws theory).

This is further assisted by a taxonomy describing prototypical scenarios of MEGs and their insolvency.

The theoretical framework and prototypical scenarios are the basis for critical analyses of various tools for 'linking' between different components of MEGs in the course of their insolvency and the degree to which they fit with a series of insolvency goals.

Thus, the book suggests a comprehensive approach for dealing with insolvency within MEGs which can be used not only within the current cross-border insolvency frameworks (e.g., UNCITRAL Model Law, EC Regulation) but also as a definitive guideline for future reform. It argues that a global group-wide perspective for MEG insolvencies can be desirable if its application is limited to appropriate types of cases where unduly defeat of entity law and territoriality concerns can be minimized.