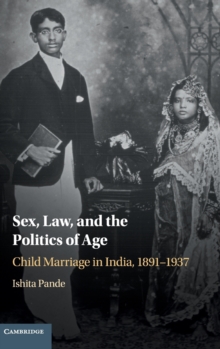 Ishita Pande's innovative study provides a dual biography of India's path-breaking Child Marriage Restraint Act (1929) and of 'age' itself as a key category of identity for upholding the rule of law, and for governing intimate life in late colonial India.

Through a reading of legislative assembly debates, legal cases, government reports, propaganda literature, Hindi novels and sexological tracts, Pande tells a wide-ranging story about the importance of debates over child protection to India's coming of age.

In doing so, Pande highlights how childhood as a political category was fundamental not just to ideas of sexual norms and domestic life, but also to the conceptualisation of citizenship and India as a nation in this formative period.