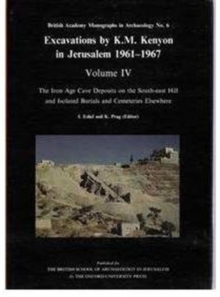 Kathleen Kenyon died in 1978 without having published final reports on her excavations in Jerusalem.

These are being now published in five volumes. This volume concentrates on finds outside the walls of the Iron Age city, and particularly on the enigmatic, pottery-rich depositis in Caves I and II to the south east of the city.

Eshel's analysis of the pottery leads him to suggest a 7th-century BC date.

Although fragmentary figurines and other `cult' objects were found, the general character of the pottery is utilitarian and Eshel suggests that the caves probably were either merchant or adminisatration store-rooms.