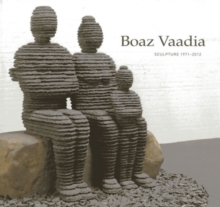 Eye-catching, life-size, and natural stone sculptures creatively conceived and intricately constructed that stop passersby in their tracks, are the hallmark of sculptor Boaz Vaadia.

Drawing inspiration chiefly from what Vaadia calls 'the primal connection to nature,' he carves and assembles multilayered figurative pieces from glacial boulders and bluestone - originally discovered by Vaadia when bluestone sidewalks in SoHo were being replaced by concrete in the mid-1970s.

He sculpts the bluestone in assorted sizes and colours to portray stunning likenesses - all named from the Old Testament - of family members, friends, and even the occasional accompanying dog or cat. The recipient of an America-Israel Cultural Foundation grant, Vaadia moved to New York from Israel in 1975 to study at Pratt Institute and to engage in the artistic energy of the city, where he immediately set up a studio.

He had his first solo show in 1976 at Hundred Acres Gallery in SoHo, exhibiting work made from natural found materials and inspired by African fetishes, religious carvings, and ancient tools. His first exhibition of figurative work was in 1986 with Ivan Karp (who represented Vaadia for several years) at OK Harris Gallery in SoHo.