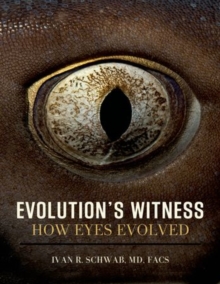 With predation and carnivory as catalysts, the first known eye appeared in a trilobite during the Cambrian explosion approximately 543 million years ago. This period was a crucible of evolution and teemed with anatomic creativity although the journey to formed vision actually began billions of years before that.

The Cambrian period, however, spawned nearly all morphologic forms of the eye, followed by descent over hundreds of millions of years providing an unimaginable variety of eyes with at least ten different designs. Some eyes display spectacular creativity with mirror, scanning or telephoto optics. Some of these ocular designs are merely curiosities, while others offer the finest visual potential packed into a small space, limited only by the laws of diffraction or physiological optics. For example, some spiders developed tiny, well-formed eyes with scanning optics and three visual pigments; scallops have 40-100 eyes circling their mantle, each of which has mirror optics and contains two separate retinae per eye; deep ocean fish have eyes shaped like tubes containing yellow lenses to break camouflage; and some birds have vision five times better than ours; but this is only part of the story.

Each animal alive today has an eye that fits is niche perfectly demonstrating theintimacy of the evolutionary process as no other organ could. The evolution of the eye is one of the best examples of Darwinian principles. Although few eyes fossilize in any significant manner, many details of this evolution are known and understood.

From initial photoreception 3.75 billion years ago to early spatial recognition in the first cupped eyespot in Euglena to fully formed camera style eyes the size of beach balls in ichthyosaurs, animals have processed light to compete and survive in their respective niches. It is evolution's greatest gift and its greatest triumph.

This is the story of the evolution of the eye.