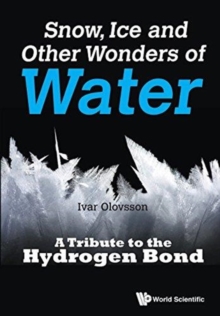 Snow, Ice And Other Wonders Of Water: A Tribute To The Hydrogen Bond Paperback / softback

The book illustrates the fascinating world of the different forms of water - from ice and snow to liquid water.

The water molecule, H2O, is the second most common molecule in the Universe (behind hydrogen, H2) and ice is the most abundant solid material.

Snow and ice appear in a countless large number of different shapes and with properties which can be quite different.

Detailed knowledge of the properties of snow is of great importance for the Sami people involved in reindeer herding and several hundred names are used to characterize the different types.The properties of ice and liquid water are very special and unique in several respects.

In contrast to most other substances, the density of ice is lower than that of liquid water, which has many very important consequences in our daily life.

Water plays a unique role in chemistry and although tremendous research has been spent on this seemingly simple substance, there are still many unsolved questions about the structure of liquid water.

The special properties of water are due to hydrogen bonding between the H2O molecules, and this book may be seen as a tribute to the hydrogen bond.

The general properties of the hydrogen bond are treated in three separate papers.

The hydrogen bond is of fundamental importance in biological systems since all living matter has evolved from and exists in an aqueous environment and hydrogen bonds are involved in most biological processes.

There is a hundred times more water molecules in our bodies than the sum of all the other molecules put together.