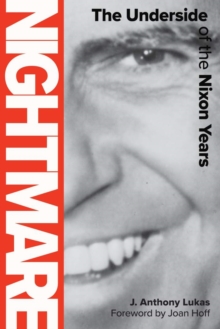 Nightmare : The Underside of the Nixon Years Paperback / softback

In July 1973, for the first time in its history, the New York Times Magazine devoted a full issue to a single article: Pulitzer Prize-winning journalist J.

Anthony Lukas's account of the Watergate story to date.

Later the Times asked him to write a third issue, on the impeachment, which never appeared because of Nixon's intervening resignation.

But all of Lukas's painstaking reporting on Nixon's last months in office appears here, along with added information on every aspect of Watergate. Widely acclaimed as a major text of the Watergate saga, J.

Anthony Lukas's Nightmare is a masterwork of investigation, highlighted by in-depth character sketches of the key players.

For students of history coming to these events for the first time, this book reveals in depth the particular trauma of a nation in turmoil; for those who remember, the upheaval and what was at stake are once more brought to life.