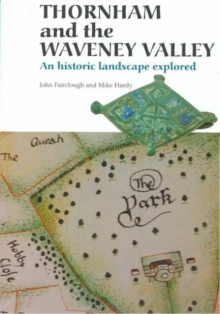 The Thornham Esrare, which lies on the southern edge of the Waveney Valley, on the border between Norfolk and Suffolk, has a complex and interesting history which is presented in this book. Based on archaeological fieldwork carried out on the estate and in surrounding areas, and documentary research of the estate archives, including maps, plans, accounts and records, this is local history at its best.

The well-written prose describes the history of Thornham from the prehistoric period through to the present day estate placed within the context of the Waveney Valley and nearby estates such as at South Elmham.

Stone Age flints, Bronze Age pots, Iron Age coins and Roman settlements are just some of the finds recovered whilst, from the early medieval period onwards, there is much more detailed and documentary evidence for the changing owners of Thornham Hall and life in and around its lands.