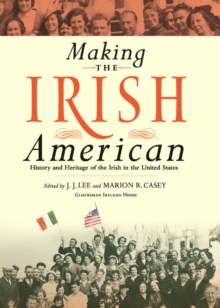 Making the Irish American : History and Heritage of the Irish in the United States Paperback / softback

Featuring 29 classic and original essays on the turbulent, vital, and fascinating story of the Irish in America.

Miller, Mick Moloney, Daniel Patrick Moynihan, Peter Quinn, and Calvin Trillin. All it takes is one St. Patrick's Day in the United States to realize that the Irish did not dissolve into the melting pot, they took possession of it.

Few other immigrant peoples have exerted such pervasive influence, have left so deep an impression, have made their values and concerns so central to the destiny of their new country. In Making the Irish American, J.J. Lee and Marion R. Casey offer a feast of twenty-nine perspectives on the turbulent, vital, endlessly fascinating story of the Irish in America.

Combining original research with reprints of classic works, these essays and articles extend far beyond a survey to offer a truly rich understanding of the Irish immigrant impact on America, and America's impact on the Irish immigrant. Here the reader will find a brisk, compact history of Ireland itself, and a wide-ranging critique of Irish American historiography, as well as explorations of the multiple complications of religion, reflected in the fluctuating, and sometimes tempestuous, relations between Catholic and Protestant Irish and Scotch-Irish.

The authors explore the various channels through which the Irish, men and women, have made their mark, from politics to labor organization, from domestic service to popular and traditional music, from sport to step dancing. Classic reprints include Daniel Patrick Moynihan's study of the Irish in New York, Pete Hamill's memoir of President Kennedy-recollecting the responses around him in Belfast at the time of the assassination-Calvin Trillin's New Yorker profile of Judge James J.

Patrick's Day parade, and Peter Quinn's meditations on the essence of Irish America, past, present and future.

They all offer sparkling insights into the evolving tension between becoming American and becoming Irish American. Making the Irish American is monumental in the best sense-serious but accessible, wide-ranging and far-reaching and enriched by seventy unique illustrations.

This exciting and challenging collection belongs on the bookshelf of everyone interested in not only the Irish American, but the American story, of which they form so vivid and prominent a part. Copublished with the Glucksman Ireland House of New York University.