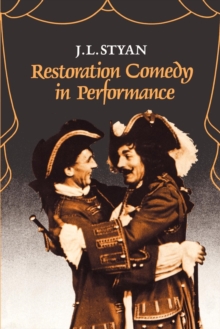 Restoration comedy disappeared from the stage for nearly 200 years until it was revived early this century.

Without the benefit of a performance tradition has suffered from an inappropriate literary and moralistic criticism which continues to this day.

Yet this brilliant court and coterie comedy of sexual and social behaviour was an extraordinary success in its own time, and enjoys a unique place in theatrical history as an example of the interplay possible between the stage and the audience.

In this book John Styan persuades us that only through a performance approach to the great plays of Etherege, Wycherley, Dryden, Shadwell, Vanbrugh, Congreve and Farquhar can we recover a sense of their value.

Restoration Comedy in Performance is liberally illustrated with contemporary drawings and modern photographs, and it draws extensively upon documentary and visual evidence of the seventeenth century in order to suggest the importance of the costume and customs, manners and behaviour of the age to an understanding of the sort of theatre and drama it produced.

Professor Styan also discusses the problems encountered in the early attempts to revive the comedies in the twentieth century, and pauses frequently in order to offer a descriptive account of a moment of staging or to recreate a scene or a sequence of comic repartee or action.

The book aims to bring back to life, therefore, something of a lost art form, not as a piece of conventional stage or production history, but as a true attempt to recognize the virtues of Restoration comedy as a performing art.