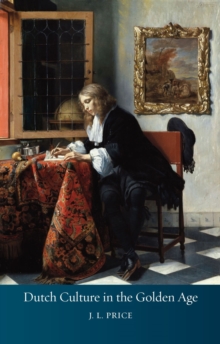 During the seventeenth century, the Dutch were at the forefront of social change, economics, the sciences and art.

This period of around one hundred years, during which Dutch culture flourished, is known as the Golden Age.

The region, which was originally one of relative obscurity, underwent a number of upheavals to achieve this success.

It is thought that the Eighty Years War with Spain was the main catalyst of these changes.

In Dutch Culture in the Golden Age, eminent historian J.

L. Price goes beyond the standard descriptions of the cultural achievements of the Dutch in their century of greatness by placing the culture in its social context.

The central argument of the book is that, alongside the innovative tendencies in Dutch society and culture, there were powerful conservative and even reactionary forces at work, and that it was the tension between these two contradictory impulses that gave the period its peculiar dynamic.

Besides art and literature, the book covers the religious and political attitudes and beliefs of the population as a whole, as well as looking at formal political thinking and theology, in addition to the development of scientific and intellectual trends. The distinctive features of this book are its broad scope, the attention paid to popular as well as high culture and, in particular, a new interpretation that places an enlightened emphasis on resistance to change as well as acceptance of innovation.

It will appeal to general readers interested in the history of Europe during this period, as well as students and scholars of the time.