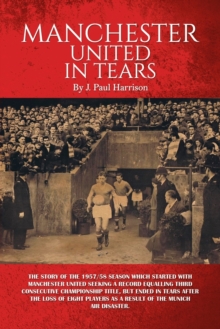 This book takes you back to that black and white era, in the days of the maximum wage, when football was still fun.

The `Busby Babes', seeking a third consecutive Championship title made a blistering start to the 1957/58 season and, with three England regulars - Byrne, Edwards and Taylor - attracted huge crowds wherever they played as spectators revelled in their adventurous, attacking football.

As the season progressed, surprisingly United's form became patchy and by the end of the year, they sat in fourth position.

The New Year brought more consistency and progress to the F.

A. Cup Fifth round and Quarter Finals of the European Cup. Fate was to play a terrible hand when, on returning from Belgrade via Munich, their chartered plane crashed whilst attempting a third take-off, killing seven players and other passengers.

Manchester United completed the season and amazingly reached the F.

A. Cup Final. The story of this eventful season is told on a day by day, match by match basis, providing a fascinating insight into the world of football in the 1950s.