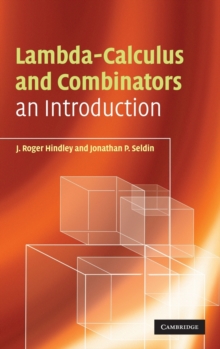 Lambda-Calculus and Combinators : An Introduction Hardback

Combinatory logic and lambda-calculus, originally devised in the 1920s, have since developed into linguistic tools, especially useful in programming languages.

The authors' previous book served as the main reference for introductory courses on lambda-calculus for over 20 years: this version is thoroughly revised and offers an account of the subject with the same authoritative exposition.

The grammar and basic properties of both combinatory logic and lambda-calculus are discussed, followed by an introduction to type-theory.

Typed and untyped versions of the systems, and their differences, are covered.

Lambda-calculus models, which lie behind much of the semantics of programming languages, are also explained in depth.

The treatment is as non-technical as possible, with the main ideas emphasized and illustrated by examples.

Many exercises are included, from routine to advanced, with solutions to most at the end of the book.