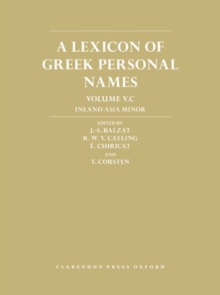 Part of the Lexicon of Greek Personal Names series

This is the eighth volume of the Lexicon of Greek Personal Names to be published, a work which offers comprehensive documentation of named individuals in the Greek-speaking world in the period from c. 700 BC to 600 AD, drawn from all sources (predominantly written in Greek and to a lesser extent in Latin).

It is the third of three volumes that comprise the personal names attested in Asia Minor: this particular volume is concerned with its interior,incorporating the ancient regions of Phrygia, the Kibyratis/Kabalis, Milyas, Pisidia, Galatia, Lykaonia, Isauria, Kappadokia, Paphlagonia, Pontos, and Armenia Minor.

In contrast to its coastal regions, inland Asia Minor was untouched by Greek settlement until after the conquests of Alexander the Great, and Greeks and Romans were but two comparatively late entrants into this multi-ethnic, multi-lingual, and multi-cultural world.

Comparatively little of the documentation predates the period of the Roman Empire but the surviving sources document a large number of non-Greek names originating in the languages of the indigenous peoples, which are of particularinterest.

Some of them are descended from the Hittite-Luwian languages spoken in Anatolia in the second and early first millennia BC, while others reveal the influence of a foreign ruling class, whether the Persians in Kappadokia or the Celts who settled in what became known as Galatia in the thirdcentury BC.

This volume provides the raw material that allows us to see how Greek and, later, Italian names entered into the name stock of these indigenous peoples, and also the varying resilience of native naming practices from one region to another as one aspect of those processes of acculturation labelled as 'hellenization' and 'Romanization'.

It documents more than 42,500 individuals bearing in excess of 7,300 different names and includes a detailed Introduction which addresses the definition of eachof the regions and their cultural identity, guides the user through some of the problems of geography and language, and provides detailed statistics that point to interesting regional patterns.

Also in the Lexicon of Greek Personal Names series   |  View all 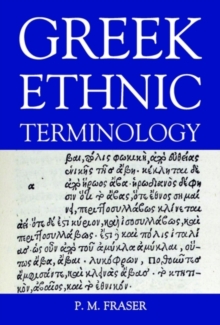 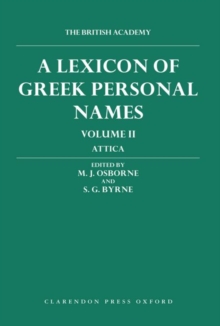 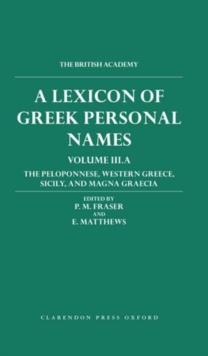 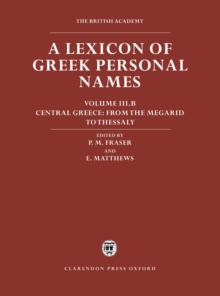