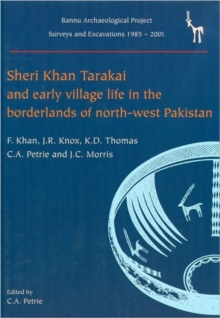 Between 1985 and 2001, the collaborative research initiative known as the Bannu Archaeological Project conducted archaeological explorations and excavations in the Bannu region, in what was then the North West Frontier Province (NWFP) of Pakistan, now Khyber-Pakhtunkhwa.

The Project involves scholars from the Pakistan Heritage Society, the British Museum, the Institute of Archaeology (UCL), Bryn Mawr College and the University of Cambridge. This is the first in a series of volumes that present the final reports of the exploration and excavations carried out by the Bannu Archaeological Project.

It marks the first attempt to contextualise the earliest village settlements in northwest Pakistan, along with those situated in other parts of the borderlands zone at the western margins of South Asia.

The work establishes the nature of the relationships between these sites and other early villages elsewhere in South, central and greater West Asia.