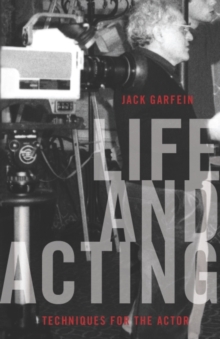 Arriving in America as a teenage Holocaust refugee, Jack Garfein would soon rise to the top of his field.

Life and Acting is the product of more than sixty years in the world of theatre and film, offering the kind of insight only gained by experience as both a teacher and practitioner.

In Garfein's case, his experience is unparalleled-he has worked with a who's who of twentieth-century acting, especially those associated with the Actors Studio, the West Coast arm of which Garfein cofounded.

In Life and Acting, Garfein distills his experience into a holistic technique for learning and teaching. "The Beginning" functions as a kind of memoir, focusing on Garfein's own education in the theatre. "The Art" describes how Garfein's exposure to nontheatre artists, particularly painters and writers, has contributed to his understanding of acting. "Basic Training" offers thirty-seven detailed lessons for teaching acting.

In "Training for Film," Garfein applies his principles to acting in front of a camera.

Like Uta Hagen's Respect for Acting and other classics of this genre, Life and Acting will be an invaluable resource for teachers as well as students.