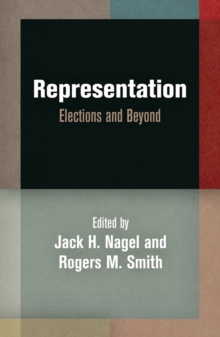 Representation : Elections and Beyond Hardback

In any democracy, the central problem of governance is how to inform, organize, and represent the opinions of the public in order to advance three goals: popular control over leaders, equality among citizens, and competent governance.

In most political analyses, voting is emphasized as the central and essential process in achieving these goals.

Yet democratic representation encompasses a great deal more than voter beliefs and behavior and, indeed, involves much more than the machinery of elections.

Democracy requires government agencies that respond to voter decisions, a civil society in which powerful organized interests do not dominate all others, and communication systems that permit divergent voices to be heard. Representation: Elections and Beyond brings together leading international scholars from a wide range of disciplines to explore the twenty-first-century innovations-in voting laws and practices, in electoral systems, in administrative, political, and civil organizations, and in communication processes and new technologies-that are altering how we understand democratic representation.

Featuring twelve essays that engage with national, provincial, and municipal governments across three continents, this volume tackles traditional core elements of democratic representation, such as voting, electoral systems, and political parties, while also underscoring the ways in which beliefs and preferences of citizens are influenced, expressed, and aggregated and the effects of those methods and practices on political agendas and policy outcomes.