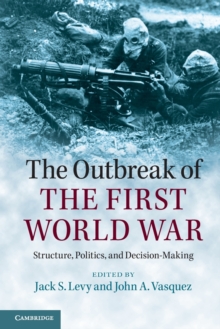 The Outbreak of the First World War : Structure, Politics, and Decision-Making Paperback / softback

The First World War had profound consequences both for the evolution of the international system and for domestic political systems.

How and why did the war start? Offering a unique interdisciplinary perspective, this volume brings together a distinguished group of diplomatic historians and international relations scholars to debate the causes of the war. Organized around several theoretically based questions, it shows how power, alliances, historical rivalries, militarism, nationalism, public opinion, internal politics, and powerful personalities shaped decision-making in each of the major countries in the lead up to war.

The emphasis on the interplay of theory and history is a significant contribution to the dialogue between historians and political scientists, and will contribute to a better understanding of the war in both disciplines.