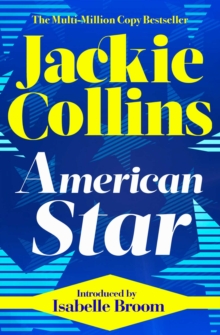 Featuring a brand new introduction frombestselling author, Isabelle Broom, talking about what Jackie and her books mean to her!

';Here is a woman who not only wanted to entertain her readers, but also to teach them something; about the world and about themselves' ISABELLE BROOM

American Star is a compelling story of love, sex and murder, set against the glamorous backgrounds of New York and Hollywood.

A true inspiration, a trail blazer for womens fictionJILLY COOPER
';Jackie shows us all what being a strong, successful woman means at any age' MILLY JOHNSON
';Jackie will never be forgotten, she'll always inspire me to #BeMoreJackie' JILL MANSELL
';Jackie's heroines don't take off their clothes to please a man, but to please themselves' CLARE MACKINTOSH
';Legend is a word used too lightly for so many undeserving people, but Jackie is the very definition of the word' ALEX KHAN
';What Jackie knew how to do so well, is to tell a thumping good story' ROWAN COLEMAN
';I read hundreds of books every year. But Jackie Collins' novels are the only ones I can read over and over' AMY ROWLAND
';Jackie wrote with shameless ambition, ruthless passion and pure diamond-dusted sparkle' CATHERINE STEADMAN
';Lessons galore on every page about feminism, equality, tolerance and love' CARMEL HARRINGTON
';Jackie is the queen of cliff-hangers' SAMANTHA TONGE
';For all her trademark sass, there is a moralist at work here' LOUISE CANDLISH
';Nobody does it quite like Jackie and nobody ever will' SARRA MANING
';Jackie bought a bit of glitter, sparkle and sunshine into our humdrum existence' VERONICA HENRY
';Jackie wrote about Hollywood with total authenticity, breaking all the rules and taboos' BARBARA TAYLOR BRADFORD
';Collins was saying that women didn't have to centre round men, either in books or in life' JESSIE BURTON
';Jackie lived the Hollywood dream, but, she looked sideways at it, and then shared the dirt with her readers' JULIET ASHTON
';What radiates from her novels, is a sense that women are capable of great things' ALEXANDRA HEMINSLEY