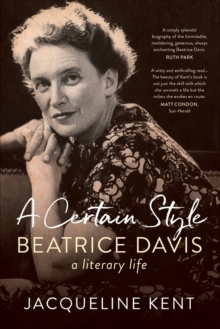 There she discovered and published such writers as Thea Astley, Miles Franklin, Patricia Wrightson, Xavier Herbert and Hal Porter becoming a literary tastemaker in the process.

A central figure in Australian literature - `respected, feared, courted and berated.' Originally published to great acclaim in 2001, A Certain Style introduced this stylish and formidable woman to thousands of readers and told a history of books and publishing in twentieth-century Australia.

This reissue has a new introduction and updates throughout as the author presents a compelling account of a contradictory woman and her times.

Author Jacqueline Kent won the 2002 National Biography Award and the Nita B Kibble Award for A Certain Style, first published by Viking.

Jacquie is now a well-known journalist and excellent media performer.

Her book The Making of Julia Gillard received a huge amount of coverage.

A Certain Style will be a great companion to other classic nonfiction NewSouth has put back into print, including books by Henry Reynolds and Anne Summers.

The name Beatrice Davis has currency because Australian Publishers' Association runs a prestigious editorial fellowship named after her.