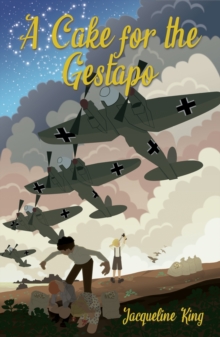 A Cake For The Gestapo Paperback / softback

Slotting in beside THE MACHINE GUNNERS and WAR HORSE, A CAKE FOR THE GESTAPO tells the story of a fictional gang of kids in Jersey during the German Occupation in WW2, weaving in very real islanders' own stories of the Occupation at its core - A history that has never before been told in children's literature June 1940.

Jersey. Joe makes light of his father's unpredictable anger, and Spinner tries to ignore the school bully, Percy, while dealing with her own mounting fears.

As for Ginger, her cousin, he's nervous of the biggest bully of all, Hitler, while her neighbour, farmer's son Clem, is apparently just keeping his head down.

But on the sly, Clem is learning to box, has hidden a gun and he's going to deal with Percy - and possibly the Germans - all by himself. All the same, none of them believes the Germans will actually invade.

Then the island is bombed, Joe is injured and outrage turns to terror as the Germans arrive and their grip on the peaceful island tightens. Initially, the adults avoid direct confrontation, while the gang is determined to go further, aiming to destroy German morale and trip them up in their every move.

At first, they simply play tricks on the soldiers, but as the situation worsens, their defiance escalates, leading them all into terrible, mortal danger. As the Occupation wears on, and deprivation turns to starvation, a distinct plan emerges for the kids - the successful elimination from the island of a Gestapo sergeant, the cruel and repugnant Viktor. -- Jacqueline King * A Cake for the Gestapo *