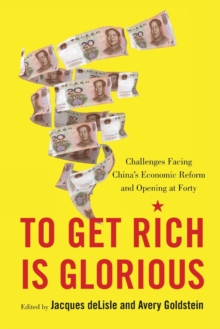 To Get Rich is Glorious : Challenges Facing China's Economic Reform and Opening at Forty Paperback / softback

Assessing prospects as China's reform enters middle age. In 1978, China's Deng Xiaoping launched the economic reforms that have resulted in one of history's most dramatic and profound national transformations.

The reforms, which have evolved and expanded during the ensuing four decades, removed institutional and policy obstacles to economic growth, tapped China's immense reserves of labor and entrepreneurial talent, and opened the country to foreign capital and investment.

China has developed a more high-tech and service-based economy currently the world's second-largest and it now sends companies and capital abroad in keeping with its new status as a leading force in international trade and investment. But China also faces daunting challenges in sustaining growth, continuing the unfinished agenda of economic transformation, addressing the adverse consequences of economic success, and dealing with mounting pressure and suspicion from the United States and other long-standing trade and investment partners.

China also confronts uncertainties and risks stemming from the project to expand its influence across the globe, the so-called Belt and Road Initiative.

In all these matters, China's current leader, Xi Jinping, seems determined to make his own lasting mark on the country and on the country's effort to become a leading global power. In this book, leading experts offer insights into the many difficult issues China now faces, including development of its rural economy, urban industrial policy, public finance, and international trade and investment.

The authors drawing on perspectives from economics, political science, and policy analysis provide historical context, drawing lessons from four decades of reform in China, and they analyze the difficulties for China's economy as the reform era moves into its fifth decade. Readers looking for a comprehensive assessment of where China's economy stands today, and its future prospects will find it in this book.