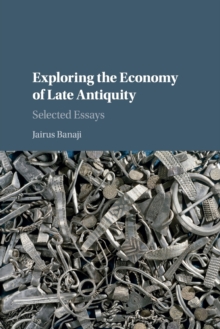 by Jairus (School of Oriental and African Studies, University of London) Banaji

This collection of essays, by leading historian Jairus Banaji, provides a stimulating rebuttal to the prevailing minimalism in late antique studies.

Together, they strike a balance between the wide lens and more specialised discussion, expanding on the perspective and argumentation laid out in an earlier book, Agrarian Change in Late Antiquity (2001).

Successive chapters discuss the scale of the late Roman gold currency, the economic nature of the aristocracy, the importance of trade, relations between the state and the ruling class, and the problem of continuity into the early Middle Ages.

A substantial introduction pulls together the themes of the book into a coherent synopsis, while the preface clarifies the broad aims behind the study.

The book as a whole deploys a wide range of sources in various languages and is intended for ancient historians, students of late antiquity, and economic historians more generally.