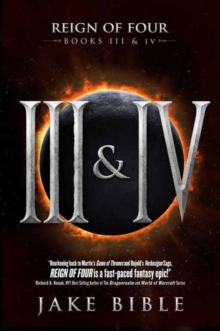 Part of the Reign of Four series

But the Cataclysm tore the land apart, and the survivors were forced to flee to the Six Stations, the artificial planetoids that orbited Helios.

It did not take long for their society to devolve into a virtual medieval world, with barely enough technology to survive the harshness of life in space.

Out of this culture arose a line of monarchs called the Reign of Four. This edition features the previously published Book III and Book IV of Jake Bible's Reign of Four series.