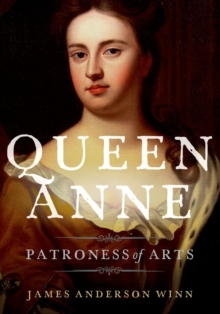 As the last Stuart monarch, Queen Anne (1665-1714) received the education thought proper for a princess, reading plays and poetry in English and French while learning dancing, singing, acting, drawing, and instrumental music.

As an adult, she played the guitar and the harpsichord, danced regularly, and took a connoisseur's interest in all the arts.

In this comprehensive interdisciplinary biography, James Winn tells the story of Anne's life in new breadth and detail, and in unprecedented cultural context.

Winn shows how poets, painters, and musicians used the works they made for Anne to send overt and covert political messages to the queen, the court, the church, and Parliament.

Their works also illustrates the pathos of Anne's personal life: the loss of her mother when she was six, her troubled relations with her father and her sister,James II and Mary II, and her own doomed efforts to produce an heir.

Her eighteen pregnancies produced only one child who lived past infancy; his death at the age of eleven, mourned by poets, was a blow from which Anne never fully recovered.

Her close friendship with Sarah, Duchess of Marlborough, atopic of scabrous ballads and fictions, ended in bitter discord; the death of her husband in 1708 left her emotionally isolated; and the wrangling among her chief ministers hastened her death. Richly illustrated with visual and musical examples, Queen Anne draws on works by a wide array of artists - among them composer George Frideric Handel, the poet Alexander Pope, the painter Godfrey Kneller, and the architect Christopher Wren - to shed new light on Anne's life and reign.

This is the definitive biography of Queen Anne.