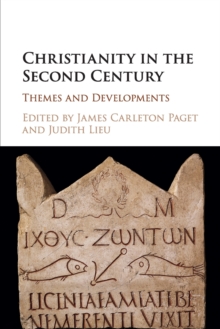 Christianity in the Second Century : Themes and Developments Paperback / softback

Christianity in the Second Century shows how academic study on this critical period of Christian development has undergone substantial change over the last thirty years.

The second century is often considered to be a time during which the Christian church moved relentlessly towards forms of institutionalisation and consolidated itself against so-called heretics.

However, new perspectives have been brought within recent scholarship as the period has attracted interest from a variety of disciplines, including not only early Christian studies but also ancient Judaism and the wider world of the early imperial scholarship.

This book seeks to reflect this changed scholarly landscape, and with contributions from key figures in these recent re-evaluations, it aims to enrich and stimulate further discussion.