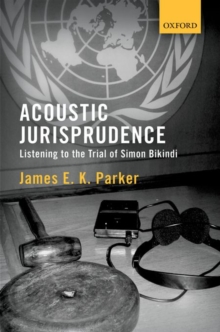 Acoustic Jurisprudence : Listening to the Trial of Simon Bikindi Hardback

Between September 2006 and December 2008, Simon Bikindi stood trial at the International Criminal Tribunal for Rwanda, accused of inciting genocide with his songs.

In the early 1990s, Bikindi had been one of Rwanda's most well-known and popular figures - the country's minister for culture and its most famous and respected singer.

But by the end of 1994, his songs had quite literally soundtracked a genocide. Acoustic Jurisprudence is the first detailed study of the trial that followed.

It is also the first work of contemporary legal scholarship to address the many relations between law and sound, which are of much broader importance but which this trial very conspicuously raises.

One half of the book addresses the Tribunal's 'sonic imagination'.

How did the Tribunal conceive of Bikindi's songs for the purposes of judgment?

How did it understand the role of radio and other media in theirtransmission? And with what consequences for Bikindi?The other half of the book is addressed to how such concerns played out in court.

Bikindi's was a 'musical trial', as one judge pithily observed.

Audio and audio-visual recordings of his songs were played regularly throughout.

Witnesses, including Bikindi himself, frequently sang, both of their own accord and at the request of the Tribunal.

Indeed, Bikindi even sang his final statement. All the while, judges, barristers, and witnesses alike spoke into microphones and listened throughheadphones.

As a result, the Bikindi case offers an ideal opportunity to explore what this book calls the 'judicial soundscape'. Through the lens of the Bikindi trial, the book's most important innovation is to open up the field of sound to jurisprudential inquiry.

Ultimately, it is an argument for a specifically acoustic jurisprudence.