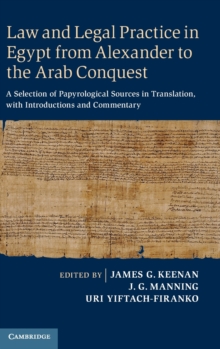 Law and Legal Practice in Egypt from Alexander to the Arab Conquest : A Selection of Papyrological Sources in Translation, with Introductions and Commentary Hardback

The study of ancient law has blossomed in recent years.

In English alone there have been dozens of studies devoted to classical Greek and Roman law, to the Roman legal codes, and to the legal traditions of the ancient Near East among many other topics.

Legal documents written on papyrus began to be published in some abundance by the end of the nineteenth century; but even after substantial publication history, legal papyri have not received due attention from legal historians.

This book blends the two usually distinct juristic scholarly traditions, classical and Egyptological, into a coherent presentation of the legal documents from Egypt from the Ptolemaic to the late Byzantine periods, all translated and accompanied by expert commentary.

The volume will serve as an introduction to the rich legal sources from Egypt in the later phases of its ancient history as well as a tool to compare legal documents from other cultures.