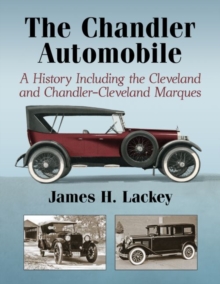 The Chandler Automobile : A History Including the Cleveland and Chandler-Cleveland Marques Hardback

Incorporated by veteran automakers in 1913, the Chandler Motor Car Company was initially successful in a fiercely competitive industry, manufacturing an array of quality automobiles at a range of prices.

Yet by the late 1920s the company was floundering under mismanagement.

Producing four lines of cars with numerous body styles, Chandler and its lower-priced companion marque, Cleveland, were unable to find markets for their numerous models and seemed in effect to be competing against themselves. Drawing on numerous automotive histories and two large private collections of memorabilia, this exhaustive study of the Chandler Motor Car Company covers the lives of the founders, as well as the histories of the several corporations they worked for while learning the automotive trade.

The author chronicles the fortunes (and misfortunes) of the Chandler-Cleveland marques, providing fresh insight into the formative years of the auto industry and the personalities who made it go.