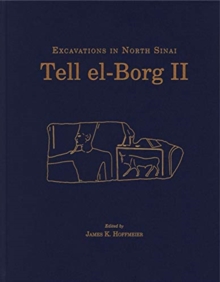 This is the second and final volume of scientific and interdisciplinary reports on the excavations and research conducted at Tell el-Borg, north Sinai, between 1998 and 2008, written by the scholars and specialists who worked on the site under the direction of Professor James K.

Hoffmeier. This volume focuses on the cemetery areas, which yield more than a dozen tombs, typically made of mud brick, some of which were constructed for a single occupant and some of which were larger tombs that accommodated multiple family members.

Included is a treatment of an area of "public" space featuring a temple and a well, among other things, and a study of the geological results of the nearby ancient Ballah Lakes that offers new data on the history of the Nile distributary that flowed by Tell el-Borg.

The balance of the work deals with specialty reports, including the faunal and botanical remains, the clay coffins, and elite stones.

A concluding chapter offers a synthesis of the decade of work and ties together the finds published in both volumes. In addition to the editor, the contributors to this volume include Stephen Moshier, Bahaa Gayed, Gregory D.