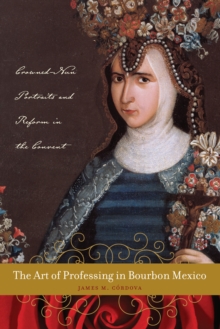 The Art of Professing in Bourbon Mexico : Crowned-Nun Portraits and Reform in the Convent Hardback

In the eighteenth century, New Spaniards (colonial Mexicans) so lauded their nuns that they developed a local tradition of visually opulent portraits, called monjas coronadas or "crowned nuns," that picture their subjects in regal trappings at the moment of their religious profession and in death.

This study identifies these portraits as markers of a vibrant and changing society that fused together indigenous and Euro-Christian traditions and ritual practices to construct a new and complex religious identity that was unique to New Spain. To discover why crowned-nun portraits, and especially the profession portrait, were in such demand in New Spain, this book offers a pioneering interpretation of these works as significant visual contributions to a local counter-colonial discourse.

James M. Cordova demonstrates that the portraits were a response to the Spanish crown's project to modify and modernize colonial society-a series of reforms instituted by the Bourbon monarchs that threatened many nuns' religious identities in New Spain.

His analysis of the portraits' rhetorical devices, which visually combined Euro-Christian and Mesoamerican notions of the sacred, shows how they promoted local religious and cultural values as well as client-patron relations, all of which were under scrutiny by the colonial Church.

Combining visual evidence from images of the "crowned nun" with a discussion of the nuns' actual roles in society, Cordova reveals that nuns found their greatest agency as Christ's brides, a title through which they could, and did, challenge the Church's authority when they found it intolerable.