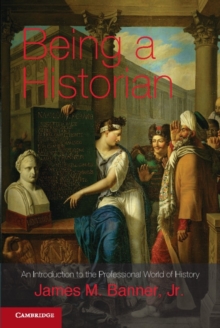 Being a Historian : An Introduction to the Professional World of History Paperback / softback

Based on the author's more than 50 years of experience as a professional historian in academic and other capacities, Being a Historian is addressed to both aspiring and mature historians.

It offers an overview of the state of the discipline of history today and the problems that confront it and its practitioners in many professions.

James M. Banner, Jr argues that historians remain inadequately prepared for their rapidly changing professional world and that the discipline as a whole has yet to confront many of its deficiencies.

He also argues that, no longer needing to conform automatically to the academic ideal, historians can now more safely and productively than ever before adapt to their own visions, temperaments and goals as they take up their responsibilities as scholars, teachers and public practitioners.

Critical while also optimistic, this work suggests many topics for further scholarly and professional exploration, research and debate.