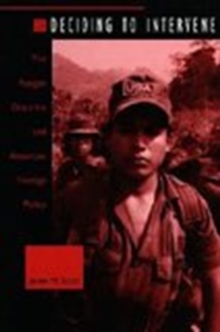 Whether to intervene in conflicts in the developing world is a major and ongoing policy issue for the United States.

In Deciding to Intervene, James M. Scott examines the Reagan Doctrine, a policy that provided aid to anti-Communist insurgents-or "Freedom Fighters" as President Reagan liked to call them-in an attempt to reverse Soviet advances in Africa, Asia, the Middle East, and Central America.

Conceived early in the Reagan presidency as a means to win the Cold War, this policy was later singled out by Reagan and several of his advisors as one of the administration's most significant efforts in the the Cold War's final phase.

Using a comparative case study method, Scott examines the historical, intellectual, and ideological origins of the Reagan Doctrine as it was applied to Afghanistan, Angola, Cambodia, Nicaragua, Mozambique, and Ethiopia.

Scott draws on many previously unavailable government documents and a wide range of primary material to show both how this policy in particular, and American foreign policy in general, emerges from the complex, shifting interactions between the White House, Congress, bureaucratic agencies, and groups and individuals from the private sector.

In evaluating the origins and consequences of the Reagan Doctrine, Deciding to Intervene synthesizes the lessons that can be learned from the Reagan administration's policy and places them within the broad perspective of foreign policy-making today.

Scott's measured treatment of this sensitive and important topic will be welcomed by scholars in policy studies, international affairs, political science, and history, as well as by any reader with an interest in the formation of American foreign policy.