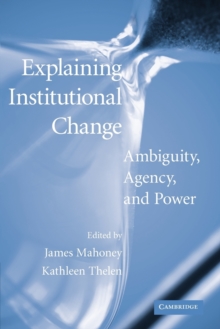 This book contributes to emerging debates in political science and sociology on institutional change.

Its introductory essay proposes a new framework for analyzing incremental change that is grounded in a power-distributional view of institutions and that emphasizes ongoing struggles within but also over prevailing institutional arrangements.

Five empirical essays then bring the general theory to life by evaluating its causal propositions in the context of sustained analyses of specific instances of incremental change.

These essays range widely across substantive topics and across times and places, including cases from the United States, Africa, Latin America, and Asia.

The book closes with a chapter reflecting on the possibilities for productive exchange in the analysis of change among scholars associated with different theoretical approaches to institutions.