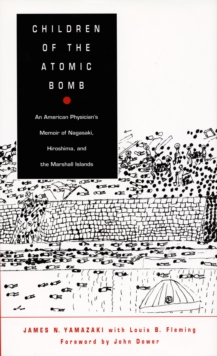 Children of the Atomic Bomb : An American Physician's Memoir of Nagasaki, Hiroshima, and the Marshall Islands Hardback

Despite familiar images of the dropping of the atomic bomb on Japan and the controversy over its fiftieth anniversary, the human impact of those horrific events often seems lost to view.

In this uncommon memoir, Dr. James N. Yamazaki tells us in personal and moving terms of the human toll of nuclear warfare and the specific vulnerability of children to the effects of these weapons.

Giving voice to the brutal ironies of racial and cultural conflict, of war and sacrifice, his story creates an inspiring and humbling portrait of events whose lessons remain difficult and troubling fifty years later. Children of the Atomic Bomb is Dr. Yamazaki's account of a lifelong effort to understand and document the impact of nuclear explosions on children, particularly the children conceived but not yet born at the time of the explosions.

Assigned in 1949 as Physician-in-Charge of the United States Atomic Bomb Casualty Commission in Nagasaki, Yamazaki had served as a combat surgeon at the Battle of the Bulge where he had been captured and held as a prisoner of war by the Germans.

In Japan he was confronted with violence of another dimension-the devastating impact of a nuclear blast and the particularly insidious effects of radiation on children.

Yamazaki's story is also one of striking juxtapositions, an account of a Japanese-American's encounter with racism, the story of a man who fought for his country while his parents were interned in a concentration camp in Arkansas.

Once the object of discrimination at home, Yamazaki paradoxically found himself in Japan for the first time as an American, part of the Allied occupation forces, and again an outsider.

This experience resonates through his work with the children of Nagasaki and Hiroshima and with the Marshallese people who bore the brunt of America's postwar testing of nuclear weapons in the Pacific. Recalling a career that has spanned five decades, Dr. Yamazaki chronicles the discoveries that helped chart the dangers of nuclear radiation and presents powerful observations of both the medical and social effects of the bomb.

He offers an indelible picture of human tragedy, a tale of unimaginable suffering, and a dedication to healing that is ultimately an unwavering, impassioned plea for peace.