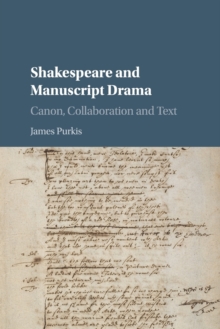 How did Shakespeare write his plays and how were they revised during their passage to the stage?

The volume also reappraises Shakespeare's supposed part in the Sir Thomas More manuscript by analysing the palaeographic, orthographic, and stylistic arguments for Shakespeare's authorship of three of the document's pages.

Offering a new account of manuscript writing that avoids conventional narrative forms, Purkis argues for a Shakespeare fully participant in a manuscript's collaborative process, demanding a reconsideration of his dramatic canon.