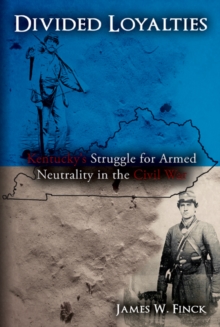 In May 1861, the Kentucky state legislature passed an ordinance declaring its neutrality, which Governor Beriah Magoffin confirmed four days later.

Kentucky's declaration and ultimate support for the Union stood at odds with the state's social and cultural heritage; after all, Kentucky was a slave state and enjoyed deep and meaningful connections to the new Confederacy.

Much of what has been written to explain this curious choice concludes Kentucky harboured strong Unionist feelings, but here in Divided Loyalties: Kentucky's Struggle for Armed Neutrality in the Civil War, James Finck persuasively argues that the Commonwealth did not support neutrality out of its deep Unionist's sentiment.

In fact, it was Kentucky's equally divided loyalties that brought about its decision to remain neutral.

Both Unionists and Secessionists would come to support neutrality at different times when they felt their side would lose. Along the way, Dr. Finck examines the roles of the state legislature, the governor, other leading Kentuckians, and average citizens to understand how Kentuckians felt about the prospects of war and secession, and how bloodshed could be avoided.

The finely styled prose is built upon a foundation of primary sources including letters, journals, newspapers, government documents and published reports.

By focusing exclusively on one state, one issue, and one year, Divided Loyalties provides a level of detail that will deeply interest both Kentuckians and Civil War enthusiasts alike. About the AuthorJames Finck was raised in Virginia where he developed a love of the Civil War.

He currently teaches American history at the University of Science and Arts of Oklahoma.

He lives in Oklahoma with his wife and three young children.