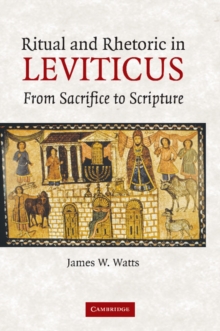 Ritual and Rhetoric in Leviticus : From Sacrifice to Scripture Paperback / softback

Ritual and Rhetoric in Leviticus uses rhetorical analysis to expose the motives behind the writing of the central book of the Torah/Pentateuch and its persuasive function in ancient Judaism.

The answer to the question, 'who was trying to persuade whom of what by writing these texts?' proves to be quite consistent throughout Leviticus 1-16: Aaronide high priests and their supporters used this book to legitimize their monopoly over the ritual offerings of Jews and Samaritans.

With this priestly rhetoric at its center, the Torah supported the rise to power of two priestly dynasties in Second Temple Judaism.

Their ascendancy in turn elevated the prestige and rhetorical power to the book, making it the first real scripture in Near Eastern and Western religious traditions.