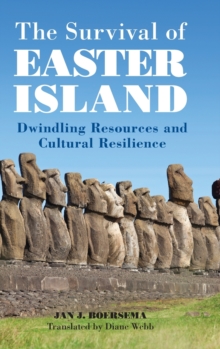 In this book, Jan J. Boersema reconstructs the ecological and cultural history of Easter Island and critiques the hitherto accepted theory of the collapse of its civilization.

The collapse theory, advanced most recently by Jared Diamond and Clive Ponting, is based on the documented overexploitation of natural resources, particularly woodlands, on which Easter Island culture depended.

Deforestation is said to have led to erosion, followed by hunger, conflict, and economic and cultural collapse.

Drawing on scientific data and historical sources, including the shipping journals of the Dutch merchant who was the first European to visit the island in 1722, Boersema shows that deforestation did not in fact jeopardize food production and lead to starvation and violence.

On the basis of historical and scientific evidence, Boersema demonstrates how Easter Island society responded to cultural and environmental change as it evolved and managed to survive.