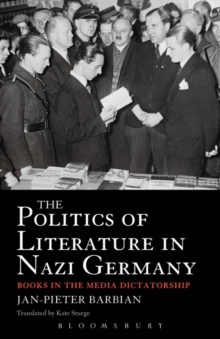 The Politics of Literature in Nazi Germany : Books in the Media Dictatorship Paperback / softback

This is the most comprehensive account to date of literary politics in Nazi Germany and of the institutions, organizations and people who controlled German literature during the Third Reich.

Special attention is given to Nazi regulation of the publishing industry and command over all forms of publication and dissemination, from the most presitigious publishing houses to the smallest municipal and school libraries.

Barbian also shows that, although the Nazis censored books not in line with Party aims, many publishers and writers took advantage of loopholes in their system of control.

Supporting his work with exhaustive research of original sources, Barbian describes a society in which everybody who was not openly opposed to it, participated in the system, whether as a writer, an editor, or even as an ordinary visitor to a library.