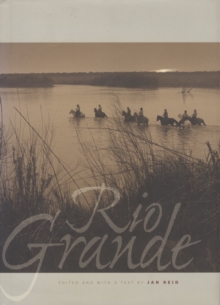 The liquid lifeline of an arid land, the Rio Grande has always been a vital presence in the American Southwest and Northern Mexico.

A source of human sustenance for at least 15,000 years, the river has also been a site of conflict ever since exploring Spaniards first crossed its channel to colonize the Native Americans.

Today, it is one of the frontiers in the war against terrorism in the Middle East.

Yet the Rio Grande has a life independent of the people who use it as a border, or a hiding place, or an ever-diminishing source of irrigation water.

This autonomous life of the river is what the writers and photographers included in this book seek to capture. Rio Grande explores the ecology, history, culture, and politicization of the river.

Reid also adds his own reflections on the river, drawn from years of traveling the Rio Grande, talking to its people, and conducting archival research. In addition to the fine writing, historical and contemporary photographs by such well-known photographers as Laura Gilpin, Russell Lee, Robert Runyon, Bill Wittliff, W.

As a whole, these voices and visions confirm the river's significance, not only as a real place, but even more as an object of the mythic imagination.