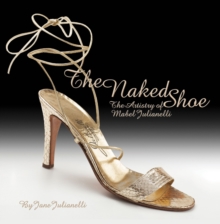 This book is far more than just a photography catalog, in the sense that it depicts, both in pictures and biographical text, the life and work of Mabel Julianelli, starting as a pattern designer in Brooklyn, NY.

Beginning with her student years studying commercial art at Pratt Institute in the 1920s, and spanning her 40-plus year career, Mabel Julianelli, with her husband and partner Charles Julianelli, is credited with many constructional, interpretative, and fashion firsts.

Her 1950 Coty Award-winning naked evening sandal, which had versions into the 1960s and 1970, is vital today due to the resurgence of ballroom dancing (i.e. 'Dancing With The Stars'): a style Mabel Julianelli first designed at a time when nobody wore sandals as evening wear. Mabel Julianelli's 1940s wedge sandal patent was referenced by Nike, Inc. in the 1990s and her shoe designs and ornaments were referenced by Jimmy Choo Ltd. in 2004-2006, among others. Mabel Julianelli's forte was the wearable, comfortable construction of shoes so it is no wonder that today's shoe companies have referenced her 1940s patents. Even though the central theme of the book is the portrayal of the shoe and the work of the designer, there is an incredible love affair between Mabel and Charles Julianelli that provides the backbone of the story, illustrating the times they lived in, through their extended teamwork, their controversial marriage, their Coty Award years, their friendships in the fashion world, their time spent with the Abstract Artists of East Hampton, NY, through the death of Charles, and the solitary years which followed for Mabel. Mrs. Julianelli is still known today among fashion people, and very much revered in fashion teaching schools such as Parsons and FIT, as well as the museums that have collected her shoes.

In addition to that there is an awareness of Mabel Julianelli's style and knowledge of her signature trends by people all over the US and Canada, selling them in their vintage shops or from their living rooms.

This book is not only for the fashionista or the cosmopolitan alone, but will have a much wider reach throughout the country and the world.