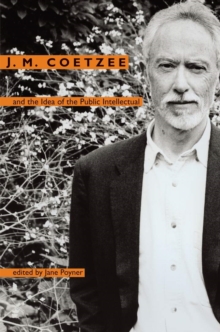 J. M. Coetzee and the Idea of the Public Intellectual Hardback

M. Coetzee was awarded the Nobel Prize for Literature, confirming his reputation as one of the most influential writers of our time.

J. M. Coetzee and the Idea of the Public Intellectual addresses the contribution Coetzee has made to contemporary literature, not least for the contentious forays his work makes into South African political discourse and the field of postcolonial studies. Taking the author's ethical writing as its theme, the volume is an important addition to understanding Coetzee's fiction and critical thinking.

While taking stock of Coetzee's singular, modernist response to the apartheid and postapartheid situations in his early fiction, the volume is the first to engage at length with the later works, Disgrace, The Lives of Animals, and Elizabeth Costello. J. M. Coetzee and the Idea of the Public Intellectual explores Coetzee's roles as a South African intellectual and a novelist; his stance on matters of allegory and his evasion of the apartheid censor; his tacit critique of South Africa's Truth and Reconciliation Commission; his performance of public lectures of his alter ego, Elizabeth Costello; and his explorations into ecofeminism and animal rights.

The essays collected here, which include an interview with the Nobel Laureate, provide new vantages from which to consider Coetzee's writing.