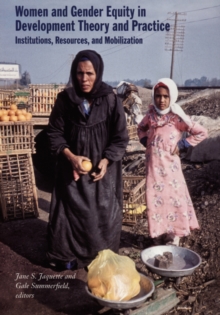 Seeking to catalyze innovative thinking and practice within the field of women and gender in development, editors Jane S.

Jaquette and Gale Summerfield have brought together scholars, policymakers, and development workers to reflect on where the field is today and where it is headed.

The contributors draw from their experiences and research in Latin America, Asia, and Africa to illuminate the connections between women's well-being and globalization, environmental conservation, land rights, access to information technology, employment, and poverty alleviation.Highlighting key institutional issues, contributors analyze the two approaches that dominate the field: women in development (WID) and gender and development (GAD).

They assess the results of gender mainstreaming, the difficulties that development agencies have translating gender rhetoric into equity in practice, and the conflicts between gender and the reassertion of indigenous cultural identities.

Focusing on resource allocation, contributors explore the gendered effects of land privatization, the need to challenge cultural traditions that impede women's ability to assert their legal rights, and women's access to bureaucratic levers of power.

In the final essay, Irene Tinker, one of the field's founders, reflects on the interactions between policy innovation and women's organizing over the three decades since women became a focus of development work.