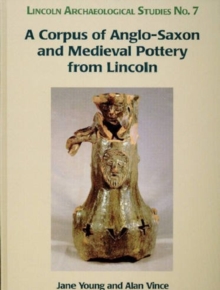 A Corpus of Anglo-Saxon and Medieval Pottery from Lincoln Hardback

Lincoln was the centre for a large Medieval pottery industry which flourished from the 9th to the 15th century.

Pottery produced in Lincoln was traded over a large part of the east midlands and beyond - even as far as Birka in Sweden.

Despite the presence of this local industry, pottery produced in the surrounding areas - such as Torksey, Stamford, Potterhanworth, Toynton and Bolingbroke - accounted for a large share of the pottery used within the city of Lincoln itself.

This volume reports on the Anglo-Saxon and Medieval pottery found during various archaeological excavations in the city from 1970 until 1987.

The authors present a city-wide pottery classification system and analyse the sequence of pottery types through time and at numerous sites.

They make extensive use of petrological analysis, including the study of over 600 thin-sections.

These have been used to characterise the local clay and temper sources exploited by Lincoln potters and to identify wares made in the vicinity of the city, those made elsewhere in the county of Lincolnshire, and to identify regional and foreign imports.

The volume is arranged by pottery types, illustrated by typical and unusual examples and accompanied by descriptions of their visual appearance, petrological characteristics, source, forms, decoration and dating evidence.