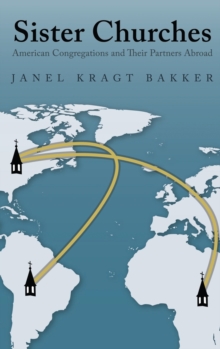 American Christians soon began looking for a fresh start, a path forward that was neither isolationist nor domineering.

Out of this dream the ''sister church'' model of mission wasborn.

In this model, rather than Western churches sending representatives into the ''mission field,'' they set up congregation-to-congregation partnerships with churches in the global South.

In Sister Churches Janel Bakker draws on extensive fieldwork and interviews with participants in thesepartnerships to explore the sister church movement and in particular its effects on American churches. Because Christianity is numerically and in many ways spiritually stronger in the global South than it is in the global North-while the imbalance in material resources runs in the opposite direction-both northern and southern Christians stand to gain.